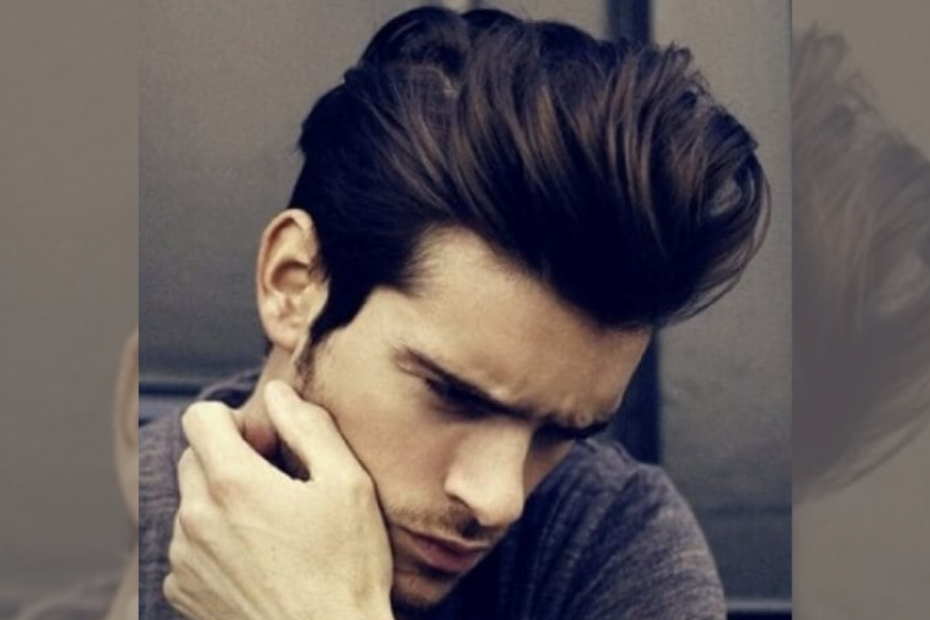 The pompadour haircut has been around for a long time and is a classic, high-maintenance style. Back in the 1800s, it was the most popular style. This haircut has stood the test of time and become this year’s best and most popular cut for men. This modern hairstyle for men has shorter sides and a longer top.

You’ve come to the right place if you want a new hairstyle that shows off your artistic and gentlemanly side. This post is all about the pompadour, which is a classic retro style that looks good on any man, no matter what time it is.

The best thing about pompadour is how many ways it can be worn. You can wear it heavily slicked back and styled for a polished, old-fashioned look, or you can add modern touches like taper cuts, undercuts, and trendy fades for a completely modern look.

Pompadour is one of the hairstyles that stands out the most. We’ve written about it a few times, so we’ve decided to give it the Haircut Inspiration treatment. This post is about the pompadour hairstyle and the different ways it can be worn.

The pomp, or pompadour, can now be worn in many different ways. We looked at two of them: the classic pompadour and the modern pompadour.

What Is The Pompadour Haircut?

The iconic style of the King of Rock and Roll was a pompadour with a lot of volumes. But truck driving, not rock and roll, gave rise to the ‘do. When Elvis was younger, he was learning to be a truck driver. At the time, truck drivers all over the country wore their hair in a pompadour style.

There are now many different kinds. You can cut it short or long, leave it out, get an undercut with it, and more. There are also a lot of products you can use to style it, and we’ve picked out some of our favorites for you.

If you have a round face, you might not want to wear this because it tends to make your face look rounder. But it looks great on almost all other face shapes and hair types.

Fades are a very popular part of men’s hairstyles these days, so why not add one to your pompadour? These styles are easy to keep up with and will make your pompadour stand out more.

Between the 1940s and the 1950s, the classic pompadour style was created. This is the purest form of the pompadour because it doesn’t have a hard part or fade. The style is good and simple, and it has a high shine. For a classic pompadour, you need hair that is at least 4-5 inches long and thick.

This pompadour is simple and easy to change. It gets a lot of its style from the abrupt drop fade on the sides. It’s a nice twist on a classic haircut that changes things up.

Most of the time, pompadours are made with straight hair or hair that has been styled to look straight. Still, a curly pompadour is an easy way to change your style to fit your hair. To get that cool look, keep it messy.

With an undercut, the hair goes from being buzzed short above the ear to being nice and long on top. In this case, this gradual cut shapes the hair into a beautiful pompadour.

The faded pompadour is a modern take on the classic pompadour style, but it still has the same general look. The front and middle look like the pompadour it was based on. The sides of the haircut are cut short to give it more edge and draw attention. The faded pompadour looks best on medium-length, medium-thickness hair. For more edge, a hard part can be added.

This is the classic “I love riding bikes” look! The top is round and thick, and the sides are just a little bit thinner to blend with the beard. Also, if you look closely, you’ll see that there is a widow’s peak, which makes this a very unique cut for the fluff. Have a thick beard to make it look more solid.

Even though the pompadour looks mostly the same as it did back in the day, there are still a few major changes. First of all, modern pomps have messy or careless hairstyles.

With this messy, full pompadour, you can give the classic James Dean style a modern twist. When making this style, don’t use too many products. A tall, wispy style looks better when it’s dry than when it’s wet and shiny.

Another classic way to wear a pompadour. It’s easy to do. Just comb your hair up and back and try to keep it as flat as possible. The line-up pompadour style looks best on hair that is soft and has a medium to fine thickness. The sides of the cut aren’t as shiny as the top.

This is what you get when you mix a hairstyle inspired by soccer with a pompadour. The coolness of that haircut is through the roof, and the fact that it is cleaner just makes it better. As there isn’t much beard to balance it out, the sides are undercut and tapered with size 1 clippers or even less.

One thing that keeps us coming back to pompadours is how well they go with facial hair. A pompadour looks great with a beard, while other retro hairstyles for men only look good with a clean-shaven face.

This style looks very much like a short pompadour. But it looks messier and has a lot more texture. The idea is to give it a lot of texture and make it less rigid. This makes it a good choice for people who don’t care about a lot of things. This style works best with hair that is longer and has a medium or thick texture. Most of the time, lay rite cement is used to style loose pomade.

The classic pompadour is neat and polished, but not all pompadours have to be like that. In this modern take on the style, the hair is messy and has a matte finish to make it look less shiny.

Here’s one of the most popular ways to wear a pompadour with an undercut, as promised. This haircut is called a “medium taper fade” by barbers because the hair on the sides and back are cut down gradually.