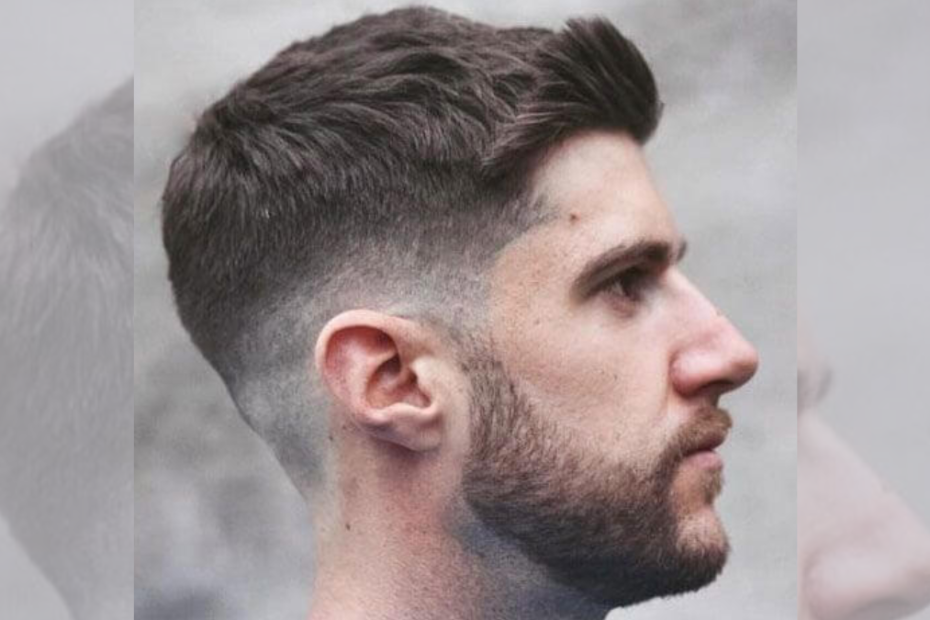 The crew cut haircut is a classic hairstyle for men who want their hair to be short and well-known. The crew cut gives a manly, cool, and low-maintenance look that is also stylish. There are many different kinds of crew cuts, but the most popular ones have fades on the sides and back and slightly longer hair on top. The crew cut fade is a popular style in modern barbershops because it is easy to style and can look different ways.

Because there are so many different modern and classic styles, it can be hard to ask your barber for the right cut.

People often use the terms “crew cut” and “buzz cut” interchangeably, but if you ask your barber for a “buzz cut” and expect a “crew cut,” you’re in for a surprise. Callum McDonald, a barber at Ruffians, says, “Unlike the buzz cut, the crew cut is tapered in the back and sides (sometimes with a fade) and has more length on top.” In a buzz cut, the hair is usually cut to its shortest length all over the head. In a crew cut, the hair stays longer on the top of the head and is different lengths on the sides of the head.

Some men get a high fade with a crew cut for a modern look, while others may like the crew cut taper for an elegant look. You can make a new look by putting different types of fades on top of a crew cut, such as a high, mid, low, or skin fade.

How to Style a Crew Cut?

Most crew cuts are very short, so it’s not hard to style them. But if you want to give your hair some texture and height, you can use a high-hold wax. Whether or not you want your hair to stand up when you use wax is totally up to you. Some of us will be able to do that on our own because we have thicker hair. Want to look more fashionable? Your front hair should be swept to one side.

If you want to give your crew cut a little more style, you can try a comfortably thick sideburn and a tapered nape! Even so, if you have a crew cut, you don’t really need to do anything to your hair in the morning and you’ll still look great.

The classic crew cut usually has short hair on top, but the hair on the sides can be a little bit longer. Instead of a fade, this traditional cut is safer for older men and more conservative.

With even shorter hair, a short crew cut haircut takes this practical and trendy haircut to the next level. The short crew cut is cut with clippers all over, like a buzz cut, and has a taper fade on the sides and back to make it stand out. The short crew cut fade is a popular choice because you can pair it with a low, mid, or high skin fade to make a bold and modern crew cut haircut. This short hairstyle for men has the same clean look and versatility as the classic cut, but it is easier to care for and style. Make sure to use a light-hold matte product when styling your hair to give it a textured finish that will make it look thick and full.

Want your crew cut to be a little longer and messier? You’ll have to find a different way to take care of it. Most of the time, a longer crew cut means that you have long hair on top. The contrast between your long hair on top and your buzzed hair on the sides will make you look good all around. Just make sure to comb or gel them well before you go out. If you don’t, your “tousled” look will just make you look messy.

This is a good option for men who don’t want to wear military shorts but still want to look neat. This cut usually looks best on people with straight or semi-wavy hair, and pomade is an easy way to keep a finished look.

This haircut is edgy when it’s done in a modern crew cut, which makes for a style that stands out. For the most contrast, guys can ask to have their sides shaved and have two inches of hair on top. To look like a dapper modern gentleman, you might want to combine a crew cut with a beard.

Men who want extra length so they can style their hair in different ways often get the long crew cut. Most of the time, this crew cut with longer hair on top is paired with a taper fade crew cut haircut to make a stylish but tough look. Leaving the hair on top a little longer gives a nice contrast to the shorter hair on the sides. You can style your hair by sweeping your fringe, combing it over and making a part, or brushing it up and making spikes on the top. The long crew cut fade works well for both businessmen and teenagers. For the best finish, you should use a product with a matte finish that has a medium to high hold. If your hair gets long enough to lay flat because of its weight, you can always style it with a side part or comb over.

The crew cut is a buzz cut, but it’s different because the sides aren’t as short. The top is a well-known buzz cut that dates back to the 1950s. Men with square or oval faces look good with this short crew cut fade. Men with different face shapes can also wear crew cuts like this one.

The textured crew cut is a stylish, smooth hairstyle for men who want to give their hair a casual look. Texturizing hair means giving it a natural-looking matte finish that makes it look full and natural. Matte hair products work to give your hair texture and shape, which is perfect for a crew cut with texture. The added texture is great for guys with thick, straight, curly, or wavy hair, but it can help thin hair look thicker in particular. To make a crew cut look thicker and fuller, use a matte pomade or clay with a light hold.

The Caesar cut is a classic hairstyle for men that will never go out of style. It has short, horizontal bangs. The hair on the sides is the same length as the fringe and is sometimes cut shorter. The textured bangs hide the fact that the hairline is getting thinner.